Sometimes you end up where you weren’t expecting to go.

Yesterday evening, I was driving alone along a familiar, busy two-lane route that winds through farmland. The sun hung low in the sky, hovering behind a cluster of clouds and radiating strokes of light.

This was a picture just waiting to be snapped. I knew those sunrays wouldn’t wait for long. Thinking I could use a farm field for leading lines in a photo of the sinking sun, I pulled over to the shoulder. Since I’m nervous about being rear-ended, stopping on the side of the road is something I generally don’t do unless a) the car is making weird noises or b) there’s imminent danger of the sudden appearance of an occupant’s barf, pee, etc.

I chose my camera settings carefully, poked the lens out the window, and waited until there was a shot clear of passing cars. Then I fired away.

I’m sure I must’ve been scowling as I reviewed the shots on my camera’s screen. No beautiful rays of light – a blown-out sky instead. Flat, dark fields in front of flat, dark trees. They looked stark and dead.

The photos were boring.

I fiddled with the exposure controls and tried again. And again.

At that point I wondered why I’m bothering to learn photography anyway. Why couldn’t I make one half-decent picture of a graceful farmer’s field in beautiful light?

Arrrrgh. I’d risked stopping here, so I didn’t want to leave without a reasonable photo. But I was so impatient with my attempts at proper camera skills that I got fed up about being overly intentional with exposure and composition.

So. I moved the angle of the camera. I didn’t bother waiting for a gap in traffic. With a slower shutter speed, I clicked like mad at cars as they passed. I was so involved in this process that the fear of getting crushed in a rear-end collision was hardly bothering me. Well, maybe a little. Especially while the car quivered in the wake of roaring transport trucks.

Luckily, I had no incidents involving automobile collisions, weird car noises, barf, or pee. At home later, I pulled up the photos on my laptop. All duds… except (I thought) for this one. 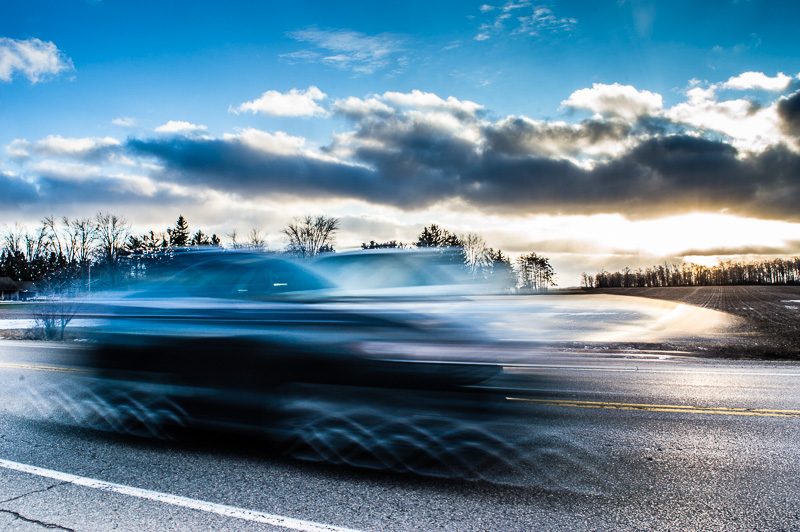 With some help from Lightroom, I made it pop. I love the pattern of the moving wheel rims.

So I admit that this picture was kind of created by accident. And that the subject (or mood) isn’t one I’d first intended. And that it was the only one of a million shots that I liked. And also that Lightroom is my friend and hero. But if I’d given up when I’d gotten discouraged about my first failed photo attempts, I wouldn’t have ended up with it at all.

A happy accident, indeed. One I can learn from.

(Inspired by the WordPress weekly photo challenge: The Road Taken).