Oh. Hello. It seems I couldn’t stay away for long. I’m back to haunt you after my first day off in a year so I can tell you a bit about last weekend’s birthday trip to Toronto.

When a suburban girl like me goes to the big city, she spends most of her time looking up and gawking.

The gawking began nearly immediately upon arrival by train, in the Great Hall at Union Station.

The morning was mild but foggy, so when we exited the station, the most celebrated landmark downtown was in a mysterious, partially-clad state:

We hiked for blocks and blocks until we reached our destination, the Royal Ontario Museum, where we lingered for hours because we were unencumbered by our children. It’s worth stating that I love my kids very much, more than life itself, in fact. But I also love going to museums without them. Last Saturday at the museum, I saw a lot of toddlers pre-, mid- and post-meltdown, and a lot of exasperated-looking moms and dads. We gave them sympathetic smiles and strolled on, relishing the time and space to gawk as we pleased. (I’ll share a few shots from the ROM tomorrow).

After a great dinner at 7 West, recommended to us by the delightful Ms. Taylor of the delightful blog One Gal’s Toronto, we walked back down to that famous tower because it had been my brilliant idea to go up it. For fun. On my birthday. Because that had seemed like a good idea back when I’d been sitting on my suburban couch in my housecoat.

My steadily increasing level of chickening-out seemed to be directly tied to our steadily diminishing proximity to the tower.

Here it is, less obscured than before but more, shall we say, reflective: 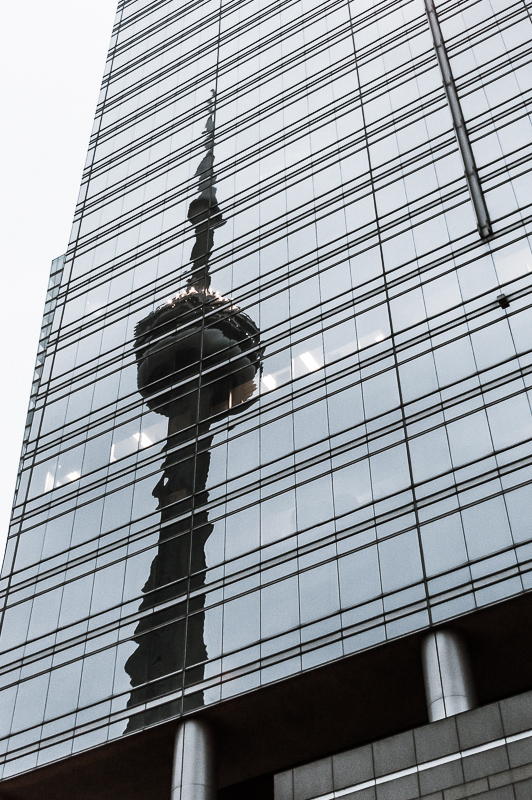 Then it started to rain. So on top of trying to prevent an anxiety attack (remember my acrophobic episode at the Pioneer Tower in Kitchener? It’s 62 feet tall. The CN Tower is 1815 feet tall), I was wet and my glasses were all spotty. I hate it when my glasses are spotty. And also when my jeans get wet. And also when I said I’d go up a giant tower but now I’m regretting it.

Well, luckily I had the Mr. with me, who talked me through it and held my hand. He even used his body to block my view of the rapidly retreating ground during the 58-second trip up the elevator, because I was busy clinging to the handrail, trying to disappear into the corner and wishing I were back on the couch in my housecoat.

Once we were up, though, it was pretty amazing. There was much gawking. Even in the dark, and even in the rain. We circled the entire outdoor observation area, lit up in bright colours that could surely be seen for miles. This deck was, thankfully, encased in a sturdy barrier (it doesn’t seem safe enough to call it “mesh”), with a very helpful “do not climb” sign attached: 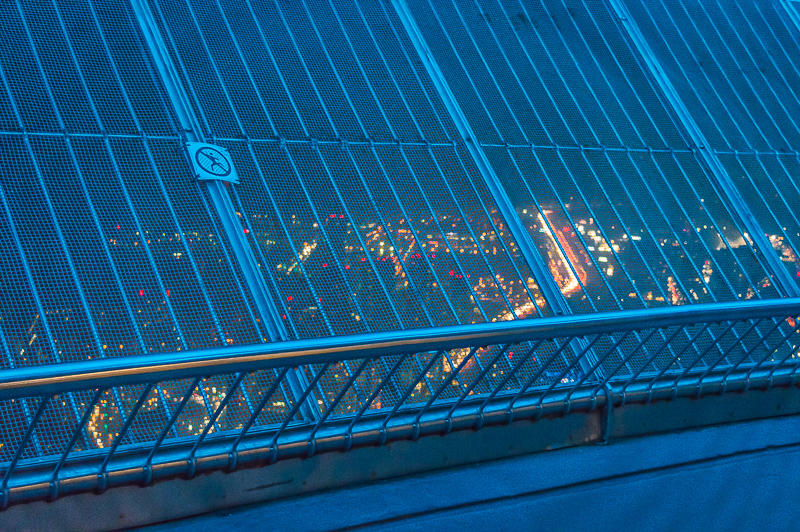 It took me a while to dare stepping on the glass floor, though. That was an accomplishment, in my books. (Again, the Mr. had to hold my hand).

Sadly, I don’t have any good shots of the view. The darkness, the glare of the indoor lights on the glass, the mist, and my inability to know how to deal with those photographically, prevented any salvageable photos. But I did get this photo of my hero of the evening, standing on the outdoor observation deck, looking a bit like he might be a lonely prisoner in a creepy radioactive prison (I don’t think the CN Tower people will want this one for their marketing efforts). 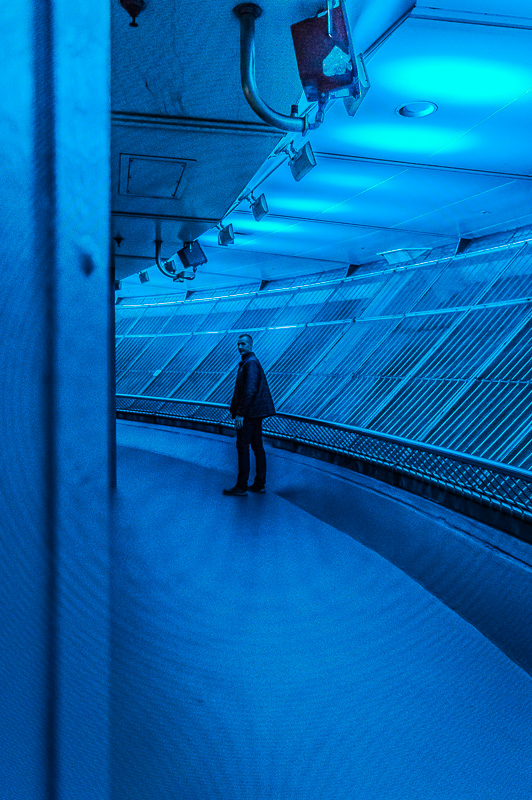 Thanks, love. It was a beautiful birthday. There’s no one else I’d rather gawk and panic with than you.

But it sure was nice to get back into my housecoat.