After a week’s absence (sorry! I’m still here!), I’m back with a few shots of the water. Well, frozen water – an ice jam choking the Grand River in downtown Cambridge, Ontario. Here’s how it looked for a few weeks – these photos were taken near the end of January: 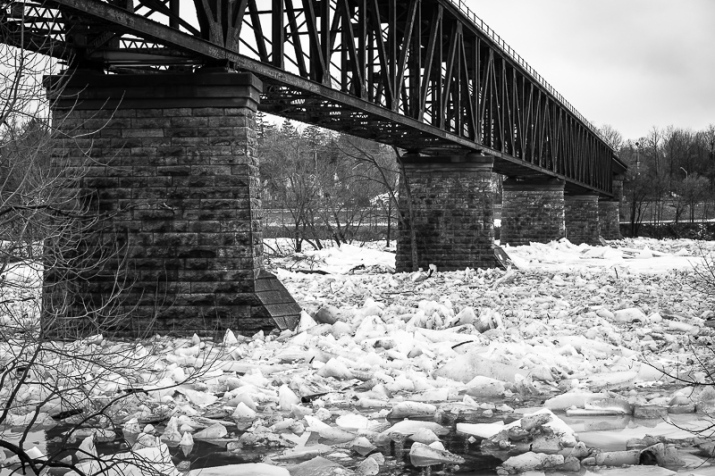 Yesterday, after a couple of mild, rainy days, the ice jam released, sending a sudden surge of water and massive chunks of ice downstream to Brantford. There, the river clogged up again and resulted in flooded roads and the evacuation of 2000 households located in the floodplain. (There’s also a heartbreaking report of a toddler swept away in another region near the flooded Grand). This afternoon, the Brantford ice jam began to loosen and water levels are receding. Ice and debris are now making their way further downstream… here’s hoping that other communities aren’t affected by flooding.

I didn’t get dramatic shots of all this excitement, but I was able to get out today to make a few pictures of the remaining ice along the banks in Cambridge.

I’ve much gratitude for the quick and tireless actions of all the staff and volunteers in our communities. Stay safe, everyone!

The same rail bridge as the one in the photos above.

I’m not really liking where these stairs are leading.

That tiny crescent beneath the windows is all that’s visible of a large, (usually) open archway.