The WordPress Photo Challenge theme this week is evanescent, defined as something “soon passing out of sight, memory, or existence.” I thought about the many directions in which this could go before settling on memory itself: slippery, fleeting, but a holder of great power.

We filter – sometimes inexplicably – the data that stays with us. It’s absurd that I can remember the inane lyrics to jingles from 1980s TV commercials, but the name of a person I’ve just met immediately vanishes into some sort of mnemonic black hole in my brain.

Our memories aren’t always clearly defined or fixed. More often, they’re stretchy and pliable; they’re coloured by perspective and frayed by time. We equate our own memories with truth – the truth? our truth? – but we have to be wary that they’re inevitably tied to our gamut of emotions and biases.

Despite the complexity and sometimes fickle nature of our memories, there can be no doubt that they help shape our most intimate personal connections, that they’re among the ingredients with which our values and behaviours and relationships are formed. Intentionally or not, our memories continually teach us and play a hand in guiding our choices.

If you’ve been touched by the experience of a loved one with an illness like dementia or a brain injury, you can begin to understand the heartbreak of witnessing progressive memory loss. For those afflicted, short-term memories are fleeting and can evaporate within moments. Long-term memories can become distorted or even completely fabricated. Personality and mood can shift and waver unpredictably. Caregivers and loved ones often experience confusion, helplessness and the pain of what seems like a prolonged and incremental state of grief.

For today’s post, then, I chose a photo I made of this tiny spring bloom. The “forget-me-not” as a symbol for those struggling with memory loss seems like rather cruel irony. But ultimately, it represents something deeper, wider: connection and loyalty and remembrance; a delicate reminder of love never lost, despite separation by time, or by space, or even by a memory-stealing illness.

However complicated or messy it may be… love remains.

“Nothing is lost…Everything is transformed.”

Being sick has its advantages, like having an excuse to lie around all day in bed, reading. Though I haven’t used my camera much during the last week or so (today’s photo was made last summer… oh, summer… how I miss you), I took the opportunity to re-read, for the umpteenth time, my favourite book.

There’s a character in Michael Ende’s The Neverending Story called Dame Eyola, a merry, maternal woman who is also, as it happens, a fruit-bearing plant (if you like fantasy stories, you won’t be disappointed in this book). She lives alone in an ever-evolving house, where the rooms shift and transform according to the building’s whim. It’s called, aptly, the House of Change.

When young Bastian, the main character, meets Dame Eyola near the end of the novel, he’s already crossed the boundaries of reality into Fantastica, a fantasy world made up of human imagination. His ambition has driven him to great heights in Fantastica, but it has also cost him dearly. He’s nearly broken when he makes Dame Eyola’s acquaintance.

Bastian has to find his way home, and to do so, he must use a magical amulet to make wishes leading him to what he truly desires. Here’s the catch: he requires memories of his old life to make a wish, but every time he makes a wish, a memory of his old life disappears. He’s in great danger of using up his last wish, losing his last memory, and ending up forever lost and confused as a Fantastican resident in the nonsensical City of Old Emperors (maybe someday I’ll post about the sad parallels between this City and the heartbreak of dementia).

Dame Eyola allows Bastian much-needed rest and nurturing. He’s encouraged to be a child – to explore, to play, to take comfort, to refuel. She consoles him when he expresses his fears of losing his last remaining memory of the boy he once was. He asks her:

“Must I lose everything?”

“Nothing is lost,” she said, “Everything is transformed.”

You may remember some basic science – the principle that mass cannot be created or destroyed, only changed (when I Googled Dame Eyola’s phrase above I learned that a very similar one  – “Nothing is lost. Nothing is created. Everything is transformed.” – is attributed to Antoine Lavoisier, an 18th century pioneering chemist).

Mass, okay. I get it. The tree that used to stand in the above photo is long-gone. Used for firewood, or furniture, or left to rot and rearrange its molecules into the rest of the living earth. Repurposed, you might say. But what of memories? Do they change when they’re lost? Where do they go? What do they become?

Fantastica, it’s said in the book, “rests on a foundation of forgotten dreams.” Quite literally, Fantastican earth is made up of layer upon layer of paper-thin pictures depicting all the forgotten dreams of humans – those that dissipate like wisps of smoke when we wake from sleep.

If you need a peaceful place to sit and ponder these things, I know a nice one. It’s carved right into an old stump, on the banks of a river. 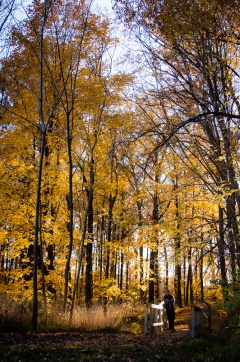 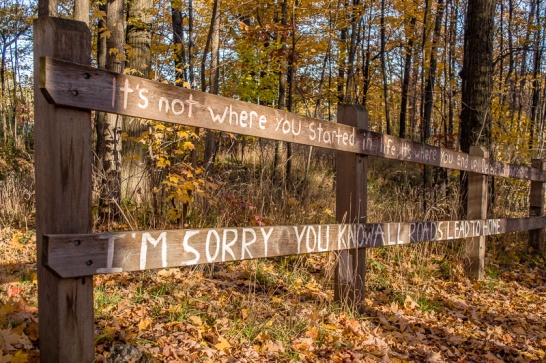 The places of one’s childhood seem to shrink over time, don’t they?

It’s been a lot of years since I set foot into The Woods near my childhood home. Since I left, the city has invested dollars and energy into a great big tidy-up, complete with a revamped community centre and plastic play structures to replace the rusty metal slide in the clearing. The trails are wide and mulched, no longer winding narrowly through gnarled roots. Today’s walk from start to finish ended abruptly, and I was a bit surprised. Disappointed, even. My childhood self remembers hiking for miles. Back then the woods seemed dark, wild, looming. Some trees are holding on to a golden glow in the fall afternoon light, but many are now bare, and the ceiling today felt open and airy.

I’d been so sure of my memories of this place. I know it had changed, and I know I was viewing it through the lens of adulthood, but all the same I was reminded how fragile our memories are. How fragmented, how pliant. How unsettling it can feel if the truth of our memories has been cast into doubt, almost as though they must have belonged to someone else. Which, of course, they did.

Sometimes it’s better to remember something the way it used to be. But in other situations, I suppose it’s somehow satisfying to witness that the wheel has turned, that change is inevitable, both in the subject of one’s memory but also within one’s self.

One more thing: Wooden fences have been added along parts of the trail. This photo’s not great, so here are the words recorded on the pictured fence: “It’s not where you started in life, it’s where you end up. Believe in yourself! :)” Ah! Some uplifting graffiti, how refreshing. A nice touch.

Then, “I’m sorry you know all roads lead to home”

Wherever the punctuation was meant to lie, I guess the writer was disappointed about the roads leading home. Maybe s/he didn’t want to go back there.

As for me – though it wasn’t exactly what I’d expected, I’m glad I did.